I’ll be speaking at my first conference post-COVID—the Open Source Initiative’s State of the Source Summit—but I’ve never recorded a talk for presenting at a virtual conference before. My webcam is frankly awful, being almost ten years old. But I love still photography and field recording, so I thought I’d give a go at repurposing that equipment for recording a talk. I’d like to share my experience with you! 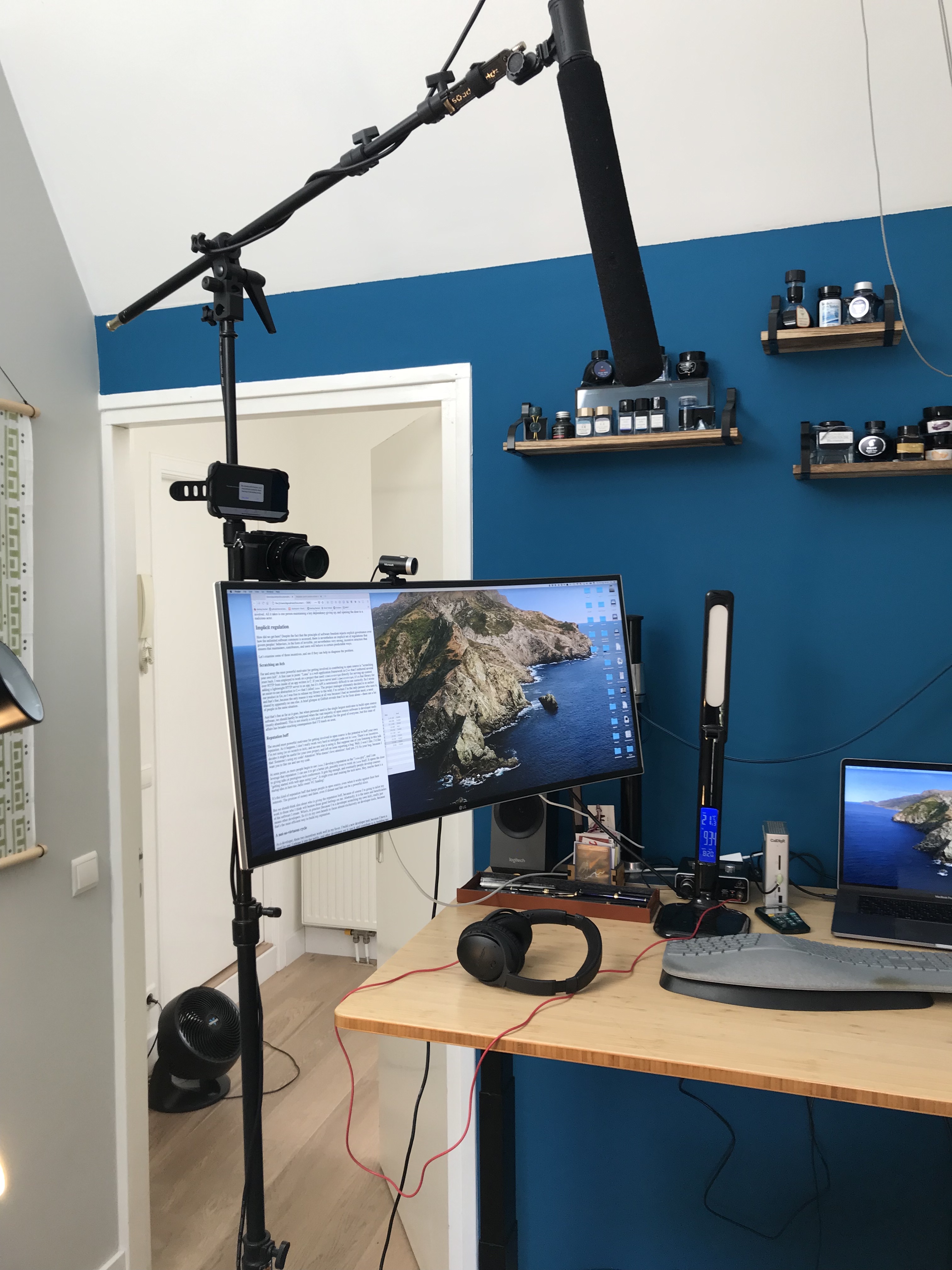 Here’s a sample of what I’ve managed to record with this setup: 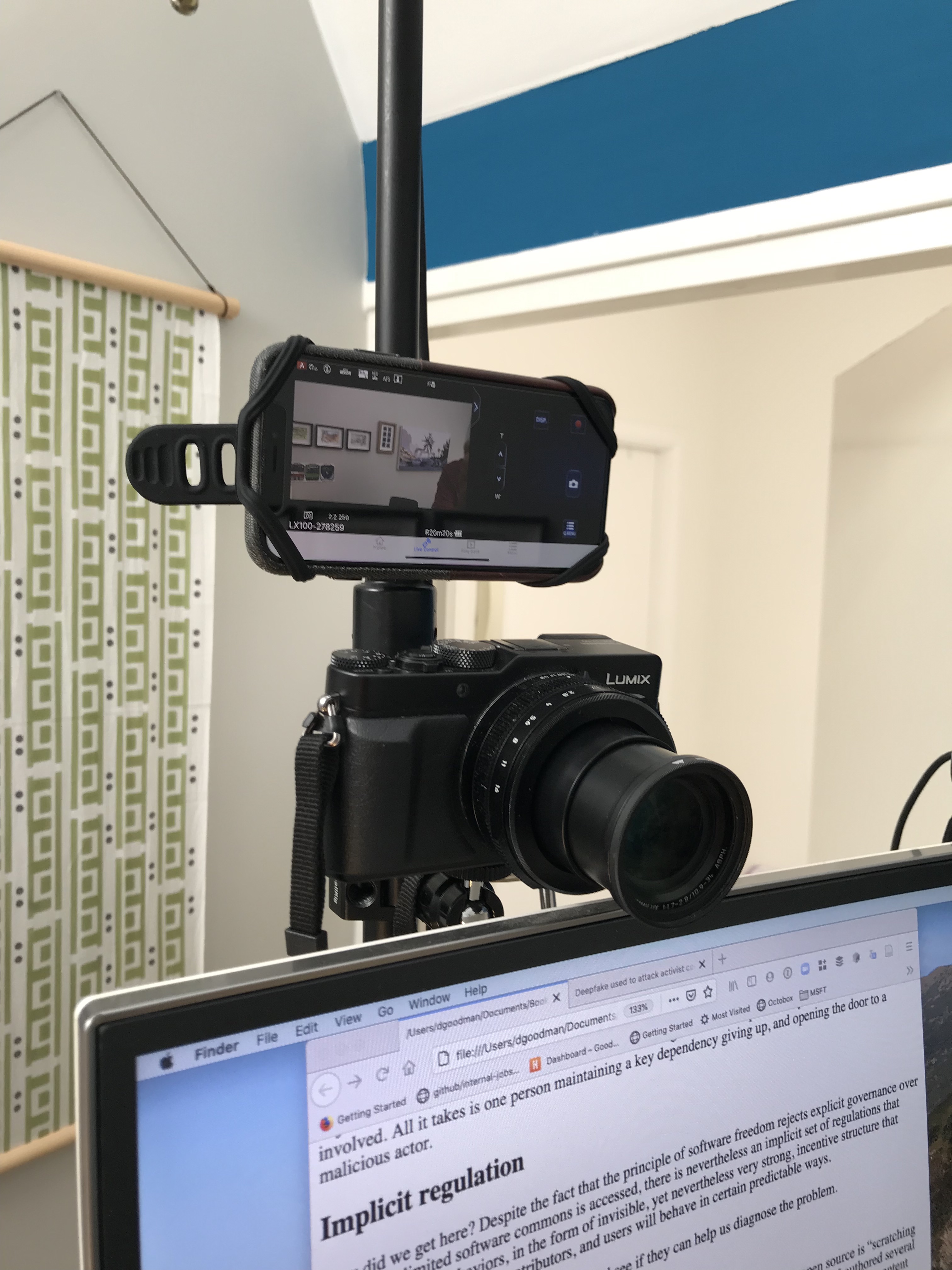 The LX100 is a compact digital camera for people like me who learned how to shoot photos on 1970’s era manual film cameras, which is why I love it. It also happens to be able to shoot video. It’s got a large sensor and a very fast lens, allowing me to shoot with the background blurred out; this looks much nicer than video shot with a webcam, where the entire room is in focus.

Because it’s not built for video, the screen on the back doesn’t rotate so you can see it from the front. But the good news here is that the LX100 can connect to my WiFi network, allowing me to use a dedicated app on my phone to preview the image, and remotely control the camera, which is super useful.

The downside is that there is no way for me to stream that video to my computer; it has to be recorded on-camera, which means I have to record the audio seperately, and then very tediously sync up the video and the audio in iMovie.

For giving talks remotely, either live or recorded, I would strongly consider the Sony ZV-1, as it has nearly as fast a lens, and it’s designed from the ground up for livestreaming. 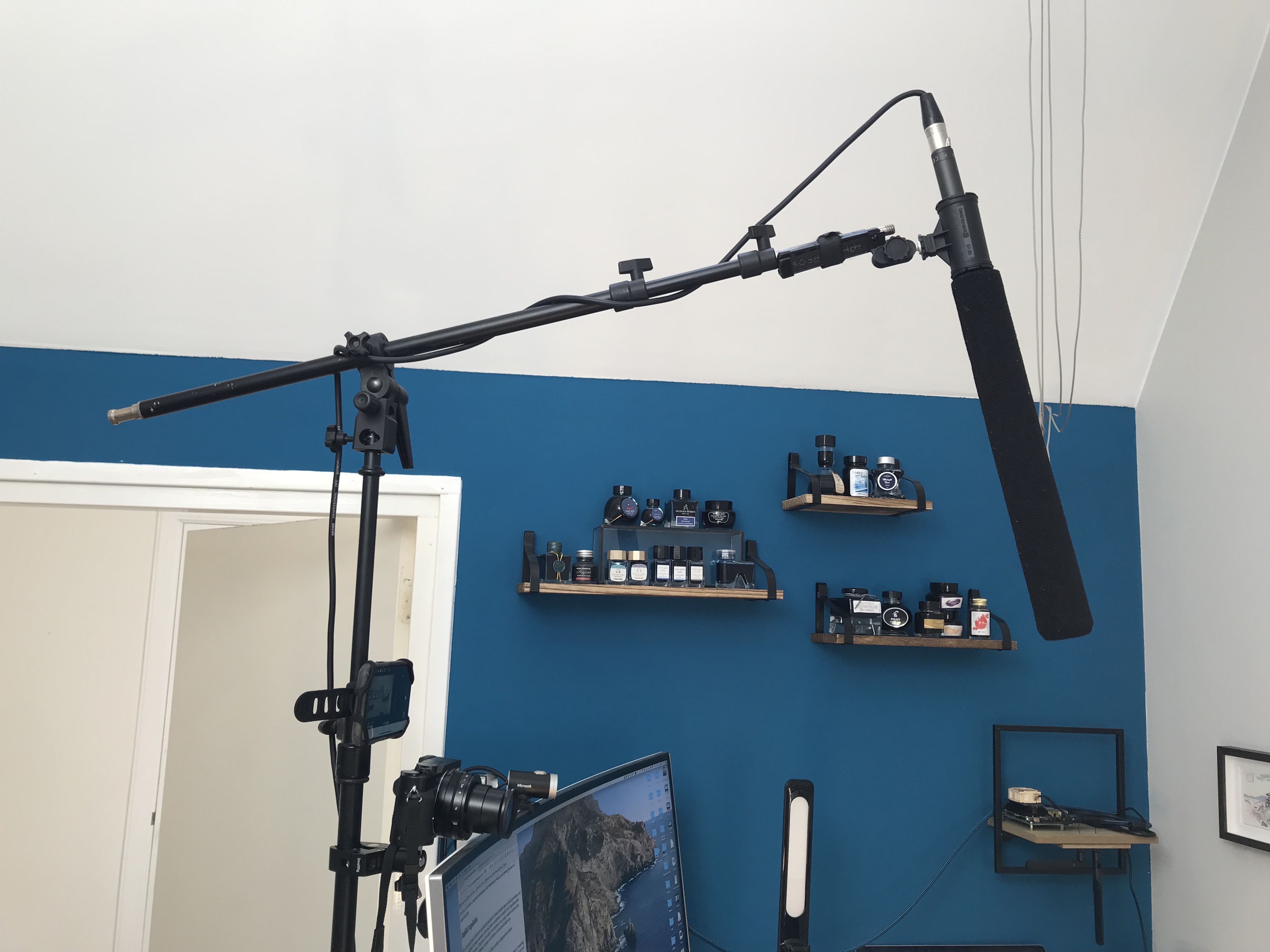 A quality microphone is the most important aspect of any recording: if the audience can’t understand you, what’s the point? I’m using an Audio-Technica AT8105 shotgun microphone. Shtogun microphones are actually designed for capturing movie dialogue outdoor or on large sound stages; they are great at picking up sound from right in front of the mic, and rejecting sound coming from the sides, but it’s a bit sensitive in my enclosed space. I had to put a fuzzy blanket on the ground to absorb sound reflections, and I have to close my windows and doors tight to keep out background noise, making my home office very hot. But the sound quality is really excellent, so I love this microphone very much.

In the future, I’d consider a dedicated podcasting-style microphone like the Yeti Blue. Such microphones are designed to handle a small amount of room echo and noise a little better than a shotgun mic, in an enclosed room. Alternately, I might just invest in some sound baffles for my walls.

The AT8105 uses an XLR connection and because it is a condensor mic, requires phantom power. This arrangement is pretty standard for field recording, or studio recording for music or movies. But it does mean that I need a pre-amp: Basically a devices that lets me connect my microphone to my computer. The Behringer U-Phoria UM2 has one input for my microphone, and presents itself as a USB audio device to my computer. Better yet, it’s got a headphone jack that lets me preview how the microphone sounds in real time, while also acting as a playout device for my Macbook. If you have a USB microphone like the Blue Yeti, those have a pre-amp already built-in, so there’s no need for such a device. But having one opens you up to the world of professional microphones, which is pretty cool.

Putting it all together.

The final results, as you can see in the video above, are pretty impressive. But the amount of work required to get that result is pretty high, and the setup doesn’t support live-streaming, only pre-recording. The next steps would be to upgrade to a dedicated video streaming camera like the Sony ZV-1, and maybe a desktop microphone like the Yeti Blue, which would be a far more flexible combination, while still providing the very high level of quality I’m getting now.